A ST. MARK THE EVANGELIST'S ARTICLE

THIS ARTICLE IS DEDICATED TO: 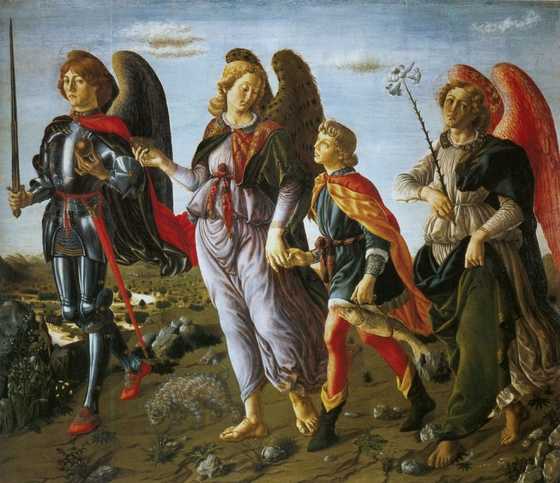 The Three Archangels: St. Michael (left), St. Raphael (centre) and St. Gabriel (right).
One of the fundamental beliefs of the Catholic Faith is the belief in the existence of spirits. These spirits, created by God, move about the world, either helping men or harming them. From the pages of Holy Scripture, and from the Tradition of the Church, Catholics have always understood that if there exists corporeal creatures (animals) and corporeal-spiritual creatures (mankind), then there must, by reason, exist a purely spiritual creature whose nature is lesser than God's, but higher than man's.

In this article, I want to explore the fundamental beliefs of the Church's teaching on the Angels, who they are, and how they operate.

Let us start at the beginning.

At the beginning of time [1], God created the Angels, intellectual spirits whose nature is higher than that of man's. When He first created them, they were all good, as was Adam and Eve. They were endowed with sanctifying grace [2], which enabled them to merit, after a period of probation, the Beatific Vision, that is, the Face of God. Before this, no Angel could see God.

As to the test that God placed upon them, the common belief is that God revealed to them that He would create Adam, that Adam would sin and fall from God, and that God would incarnate as a man to redeem men from their sins. Added to this, God also revealed to them that the woman who would bear Him would become the Queen of Angels.

At this, the Angels were given a choice: did they accept this or reject it? Those who accepted this plan of salvation entered to the Beatific Vision, and were blessed with seeing the Face of God for eternity. Those who rejected, were to be banished from Heaven, and cast into Hell, "which was prepared for the Devil and his Angels"[3]. The fallen Angels became known as devils or demons, and the prince of them is called the Devil, Satan, or Lucifer. It is interpreted from Apocalypse 12:4 that Lucifer, after he had communicated his rejection of this plan, led a third of the Angels into rebellion. The other two-thirds remained faithful to God, but the exact numbers of either is unknown. We can reasonably surmise that there are billions of Angels, since each human being has a guardian angel, and at present there are over 7 billion humans in the world. Marry this with the fact that other Angels are ascribed official functions of maintaining the operation of the universe, and we can begin to realise that there is probably more than we would dare to admit. Of the demons, we can only surmise, again, that there is a vast multitude of them.

The two-thirds of the Angels who submitted to God's plan were allowed to enter into the glory of the Beatific Vision. As a reward for their faithfulness, God ascribed certain Angels with certain functions over the created world. Some just adore God without end; others take charge of the affairs of other Angels; still others are charged with the operation of the laws of nature etc.,; and still others are charged with men's affairs.

The Church traditionally ascribes nine choirs (or ranks) of angelic spirits. These choirs are as follows [4], from highest to lowest:

One may ask: how come the Angels are the lowest rank, yet all are called Angels? Simply put, the name Angel denotes an office, not a nature. The nature of Angels is spirit; but their office is Angel which means messenger in Greek. Technically, the name Angel refers only to the lowest choir of heavenly spirits, but we usually call all the spirits Angels. On the subject of their nature, St. Thomas teaches us that each Angel is a different species to the others, so that there is no one species of Angel. But, that is rather deep theology which I shall not bore the reader with here. If you wish to read St. Thomas's writings on this, please click the link provided in the footnotes at this number [5].