st. theresa of the child jesus 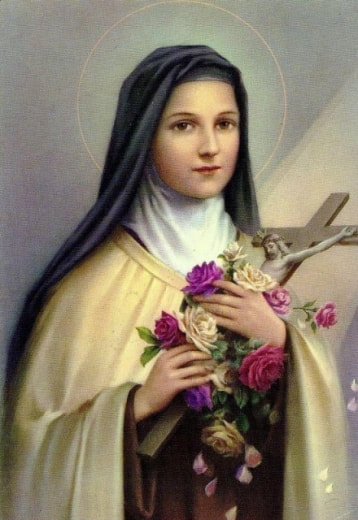 October 1st, is the feast day of St. Thérèse of the Child Jesus and the Holy Face, more popularly known as St Thérèse of Lisieux, "the Little Flower." Although just an obscure cloistered Carmelite nun, she has achieved universal appeal since her death in 1897. This beloved saint is the patron of foreign missions, missionaries, against tuberculosis, AIDS sufferers, illness and loss of parents. Her perfect trust in God, deep faith and patient suffering is an example for us to follow. Saint Pius X called St. Thérèse the "greatest saint of modern times."

Marie Thérèse Martin was born at Alençon, France on January 2, 1873, the youngest of five daughters. Her father, Louis Martin, was a watchmaker, and her mother, Zélie Martin, who died of breast cancer when Thérèse was four, was a lace maker. (On October 18, 2015, Pope Francis canonized Louis Martin and Marie Zélie Guerin Martin saints.) Thérèse was brought up in a model Catholic home. The Martins attended Mass daily, prayed and fasted, visited the elderly and the sick, and welcomed the poor into their home. All five of the Martin's surviving daughters would enter religious life. While still a child, Thérèse felt the attraction of the cloister, and at fifteen obtained permission to enter the Carmel of Lisieux.

For the next nine years she lived a very ordinary religious life. There are no miracles, exploits or austerities recorded of her. She attained a very high degree of holiness by carrying out her ordinary daily duties with perfect fidelity, having a childlike confidence in God's providence and merciful love and being ready to be at the service of others at all times. She also had a great love of the Church and a zeal for the conversion of souls. She prayed especially for priests.

Click here to learn more about the life and mission of St. Thérèse.

Thérèse's last years were marked by tremendous hardship, which she endured without complaint. She saw her suffering as part of her spiritual journey. On June 9, 1895, the feast of the Most Holy Trinity, she offered herself as a sacrificial victim to the merciful Love of God. The following year, after a strict Lenten fast, Thérèse went to bed on the eve of Good Friday and experienced a joyous ecstasy. "Oh! how sweet this memory really is!", she wrote, "I had scarcely laid my head upon the pillow when I felt something like a bubbling stream mounting to my lips. I didn't know what it was." On the verge of intense suffering, Sœur Thérèse understood this to be a mysterious visitation of her most divine Spouse.

The next morning, she began coughing up blood — a sure sign of tuberculosis. In Thérèse's day, developing tuberculosis meant an inexorably slow painful death. She recorded her thoughts in her journal: "I thought immediately of the joyful thing that I had to learn, so I went over to the window. I was able to see that I was not mistaken. Ah! my soul was filled with a great consolation; I was interiorly persuaded that Jesus, on the anniversary of His own death, wanted to have me hear His first call!"

Thérèse died of consumption on September 30, 1897, at the age of 24, and was canonized in 1925. She has never ceased to fulfill her promise: "I will pass my heaven in doing good on earth." Her interior life is known through her bestselling autobiography, Story of a Soul. This spiritual memoir was taken from three manuscripts she wrote in the last years of her life and published a year after her death. Pope Saint John Paul II declared her a Doctor of the Church in 1997. The profound spiritual insights contained in her writings have influenced many.

Six years after entering the cloister, determined to become a saint, Thérèse saw the limitations of her efforts. She remained diminutive, far from the selfless love she aspired to. It was on this very littleness that Thérèse learned to ask for God's help. This spiritual mindset of humility and simplicity is the 'Little Way. St.Thérèse describes it in her autobiography:

I will seek out a means of getting to Heaven by a little way—very short and very straight, a little way that is wholly new. We live in an age of inventions; nowadays the rich need not trouble to climb the stairs, they have lifts instead. Well, I mean to try and find a lift by which I may be raised unto God, for I am too tiny to climb the steep stairway of perfection. [...] Thine Arms, then, O Jesus, are the lift which must raise me up even unto Heaven. To get there I need not grow; on the contrary, I must remain little, I must become still less.