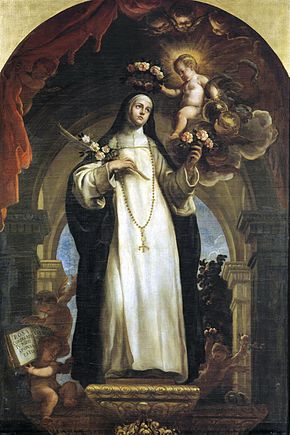 Saint Rose of Lima, (1586-1617), a member of the Third Order of St. Dominic, was the "first blossom of sanctity that South America gave to the world." Hers was a life heroic in virtue and penance. She expiated the evils perpetrated by the conquerors of the land in their lust for gold. Her life was a silent sermon of penance. Pope Clement X stated in the bull of canonization: "Since the discovery of Peru no missionary has arisen who effected a similar popular zeal for the practice of penance."

Already as a five-year-old child, Rose vowed her innocence to God. While still a young girl, she practiced mortifications and fasts that vastly exceeded ordinary discretion; during all of Lent she ate no bread, but subsisted on five citron seeds a day. In addition, she suffered repeated attacks from the devil, painful bodily ailments, and from her family, scoldings and calumnies. All this she accepted serenely, remarking to a friend that she was treated better than she deserved.

For fifteen years she patiently endured the severest spiritual abandonment and aridity. In reward came heavenly joys, the comforting companionship of her holy guardian angel and of the Blessed Virgin. August 24, 1617, proved to be the day "on which the paradise of her heavenly Bridegroom unlocked itself to her."

St. Rose is said to have predicted the date of her own death. Her solemn funeral was attended by the public authorities of Lima and hundreds of its citizens. She was beatified in 1668 by Pope Clement IX and canonized by Pope Clement X in 1671.