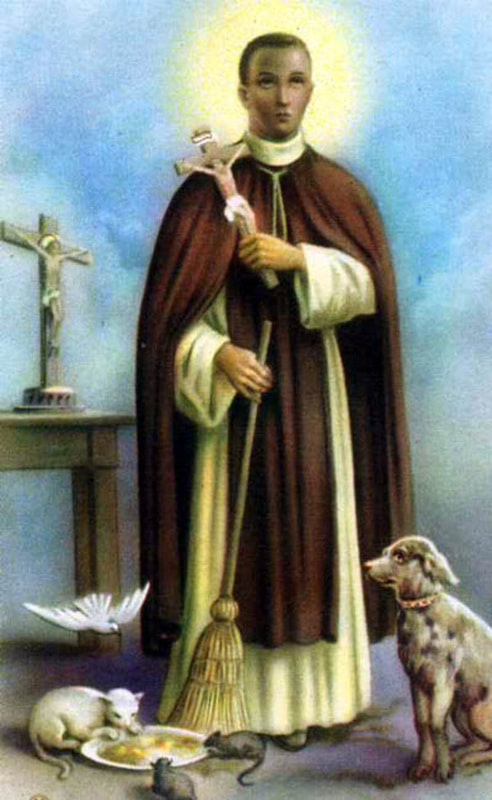 November 3, is the optional memorial of Saint Martin de Porres, (1579 – 1639) the 17th century, Dominican lay brother, who lived a life of heroic self-denial, prayer and penance, in imitation of Christ. Juan Martin de Porres Velázquez was born in Lima, Peru, the son of Spanish nobleman, Don Juan de Porres, and Ana Velázquez, a freed slave from Panama, of mixed descent. His father abandoned the family two years later, after the birth of Martin’s sister, Juana, leaving them impoverished. His mother did laundry to support the family.

When his mother could no longer support him, Martin briefly attended a residential primary school, before apprenticing with a skilled barber/surgeon from whom he learned the medical arts. He would spend hours a night in prayer, a practice he continued for the remainder of his life. In, 1590, at age 11, Martin joined the Holy Rosary Dominican priory in Lima as a servant. Peruvian law forbid those of African and Indian heritage from becoming full members of religious orders. Martin was assigned to the friary’s infirmary. There he labored diligently caring for the sick and the indigent. Within months, he was named an almoner and — by virtue of his healing abilities, placed in charge of the infirmary.

Martin had the gift of miracles; including, ecstasies during which he levitated into the air, light illuminating the room where he prayed, bilocation, miraculous understanding, instantaneous cures and a remarkable rapport with animals. He established a home for Lima’s orphans and abandoned children in the city of Lima. Although he lacked formal theological training, he was frequently consulted on theological questions by great churchmen of his time. Of his love and devotion to God and to others, Father Hugo Hoever, S.O.Cist., Ph.D., writes:

St. Martin's love was all-embracing, shown equally to humans and animals, including vermin, and he maintained a cats' and dogs' hospital at his sister's house. He also possessed spiritual wisdom, demonstrated in his solving his sister's marriage problems, raising a dowry for his niece inside of three days' time, and resolving theological problems for the learned of his Order and for Bishops.

Already venerated as a living saint, Martin died peacefully on November 3, 1639. His body was interred on the grounds of the monastery. Innumerable miracles were attributed to his intercession following his death. After twenty-five years, his body was exhumed and found intact. In 1763, Pope Clement XIII issued a decree affirming the heroism of his virtues. He was beatified by Pope Gregory XVI in 1837, and canonized by Saint John XXIII on May 6, 1962.

Saint Rose of Lima and Blessed John Massias were his close friends. He is known as the Patron of social justice. ​
© 2020 St. Mark the Evangelist. All rights reserved.