st. hilary of poitiers
​Bishop &
​Doctor of the Church 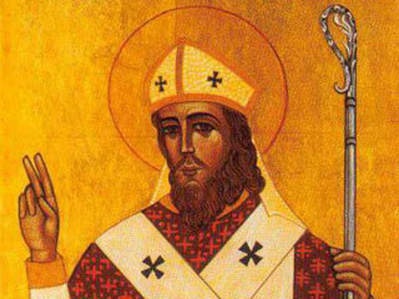 Today, Holy Mother Church pays Her respect to a great Saint known as the Malleus Arianorum (Hammer of the Arians). St. Hilary's (in Lat: Hilarius) defence of the Divinity of Christ was at a time when the pernicious heresy of Arianism, which denied the same, had taken strong root amongst the Church. Indeed, whilst the heresy of Arianism was overcome by Orthodoxy, yet strains of it exist today in the forms of the Jehovah's Witnesses, Unitarians, Christadelphians and other such heretical sects. Yet we Catholics, who hold the True Faith, profess the Divinity of Jesus Christ, and together with St. Hilary, rejoice to partake of that Divinity.

Our Saint was born into a pagan family c. 315, but later converted to Catholicism after discovering God through the Scriptures. At the age of 35, together with his wife and daughter, he was baptised into the True Religion, and quickly rose through the Church. So great was his reputation for holiness and his faithful defence of the Divinity of the Saviour that he was appointed Bishop of Poitiers, France, in 353, to great acclaim. Around this same time, Constantius II became Emperor. He was an Arian.

Constantius, at the behest of pro-Arian prelates, promptly exiled the Saint to Phrygia (modern day Turkey) in the hopes that the exile would silence him. Alas, it did no such thing. Instead, Hilary began writing prolifically against the Arian heresy, convincing many to abandon it. He was eventually allowed to return to France, after the Emperor had died, and together with St. Martin of Tours, established monasticism. The local Church in France condemned the heresy of Arianism, much to the joy of the Saint. Yet, Hilary showed compassion to those whom he believed to be honestly mistaken. He helped the clergy to be better trained in the Faith, teaching them the Dogmas of the Church, so that they could go out and instruct their congregations and guide them to the right belief.

St. Hilary died at Poitier in 367. His personal example of holiness and right Faith, together with his writings, influenced many souls, including his student, St. Martin of Tours. A favourite motto of the Saint was: ministros veritatis decet vera proferre (Servants of the truth ought to speak the truth). Long venerated as a Saint in the Church, in 1851, Pope Bl. Pius IX elevated him to the rank of Doctor of the Church.

Along with the title Hammer of the Arians, he is also called the Athanasius of the West. His name, Hilarius, means to be cheerful and happy, which no doubt the Saint was in his earthly life, and is now in his heavenly life!

O noble St. Hilarius, Hammer of the Arians and Athanasius of the West, whose name means cheerful and happy, grant that we, supported by thy gracious intercession, may always be cheerful and happy in proclaiming the Divinity of Our Redeemer to those who have no knowledge of Him, or who hold heretical beliefs regarding His Person. Aid the clergy in the right belief, and intercede for thy brother bishops who fail in their mission to guide the Church. Support the Holy Father in professing the True Faith, in proclaiming the Church's constant Teaching even if be to the detriment of his name, reputation or life. By the grace of Almighty God, may we all be hammers to destroy heresies. And as the mallet is used to even out the flesh of beasts, so may we be spiritual mallets to even out the Teachings of the Church, for the glory of our Lord and God Jesus Christ, the praise of the Blessed Virgin Mary, Pillar of Orthodoxy, the exultation of Holy Mother Church and for thine own honour. Amen