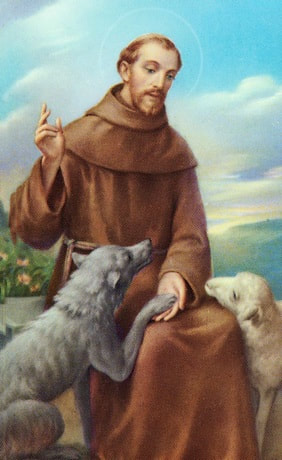 October 4th, the Church celebrates the feast of Saint Francis of Assisi, (1182-1226) the 13th century Italian friar, preacher, mystic, and founder of the Franciscan Order, who is among the most venerated religious figures in history. He was born Giovanni di Pietro di Bernardone, in Assisi, Umbria, Italy, one of seven children, to parents Pietro and Pica Bernardone. His father, a wealthy merchant, called his son Francis (Italian: Francesco) in homage to the nation of France where Pietro had commercial success. Francis enjoyed a youth of luxury and license. He himself acknowledged living in sin during this time.

The future saint yearned for worldly glory. At 19, he joined a military campaign against a rival Italian city-state and was captured and imprisoned. During his yearlong captivity, God spoke to Francis, telling him to return home. Chastened, Francis obeyed. Later, on a pilgrimage to Rome, he joined the poor begging at Saint Peter's. It was there that he encountered a leper. Moved with compassion, Francis gave the man a kiss as a sign of peace, afterwhich, the man immediately vanished. Francis concluded that God had been testing him.

The final providential experience that crystallized Francis’ conversion occurred when he visited the neglected church of San Damiano near Assisi. There, while praying in front of the icon of Christ Crucified, Jesus said to him: "Francis, Francis, go and repair My house which, as you can see, is falling into ruins." Assuming it was the church in which he was praying, Francis sold cloth from his father's inventory to help pay for repairs. Enraged, his father took Francis to the Bishop of Assisi and demanded recompense. The bishop ordered Francis to repay. Francis publicly renounced his father and his patrimony completely, even casting off the garments that he had been given by his family.

Francis dedicated his life to serving the poor. Taking to the streets, he lived day to day, relying on God to provide as he cared for the sick and the marginalized. His compassion, radical self-denial and dynamic preaching was attracting large numbers of followers. In 1210, with Pope Innocent III’s blessing, Francis founded the Order of Friars Minor (Franciscans). Two years later, along with Saint Clare of Assisi, he founded the Order of "Poor Ladies," now known as the "Poor Clares." He established the "Third Order of Penance" (the Third Order) for lay men and women not able to live out the lives of itinerant preachers. He is the first person recorded to receive the stigmata of our Lord’s Passion and Death (1224).

During the Fifth Crusade in 1219, Francis visited Malik al-Kamil, the Sultan of Egypt, a leader of the Muslim forces. The outcome of this meeting is uncertain. However, according to a sermon by Saint Bonaventure, later sources report that the Sultan secretly received a death-bed baptism as a result of his encounter with Francis. St. Francis is attributed with the ability to converse with animals. He died on October 4, 1226 at Portiuncula, Italy. His good friend and admirer, Pope Gregory IX, canonized him in 1228. He is the patron of animals, merchants and the environment.