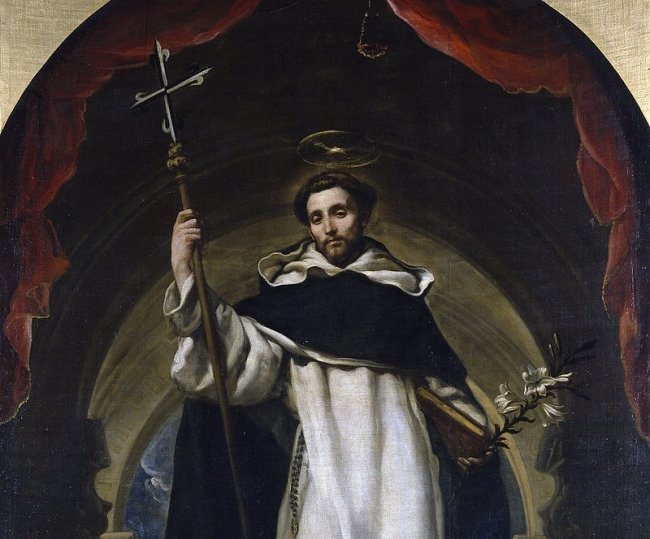 The Martyrology gives the following: "At Bologna (upper Italy) the holy confessor Dominic, the saintly and learned founder of the Order of Preachers. He preserved his virginity inviolate and gained for himself the grace of raising three dead persons to life. By his word he crushed heresy in the bud and led many souls to piety and to religious life." He was notable for his learning and love of poverty.

Born about 1175 in Castile (Spain), Dominic hailed from the illustrious Guzman family. First he was a canon regular at Osma; then he founded the Dominican Order, which was approved in 1216. Alongside the Franciscans, it became the most powerful Order in medieval times, giving the Church illustrious preachers — St. Vincent Ferrer, and contemplatives, Sts. Thomas of Aquinas and Pius V — and contributing immeasurably to maintaining the purity of the faith. Through the example of apostolic poverty and the preaching of the word of God the Friar Preachers were to lead men to Christ. To St. Dominic is attributed the origin and spread of the Holy Rosary. This devotion he spread tirelessly the rest of his days.

The two contemporaries, Dominic and Francis, effected a tremendous spiritual rejuvenation through their own spiritual personalities and through their religious foundations. Of the two, Dominic was the realist who surpassed the other intellectually and in organizational talent. His spirit of moderation, clarity of thought, and burning zeal for souls have become the heritage of the Dominicans.

Legend has contributed the following rare anecdote as preserved in the Breviary: "During pregnancy, Dominic's mother dreamed she was carrying in her womb a little dog that held a burning torch between its teeth; and when she had given birth, it set the whole world on fire. By this dream it was made manifest beforehand how Dominic would inflame the nations to the practice of Christian virtue through the brightness of his holy example and the fiery ardor of his preaching." He died at Bologna upon hearing the liturgy's prayer for the dying: "Come, ye saints of God, hasten hither, ye angels!", on August 6th, 1221.

His friend, Pope Gregory IX, canonized him three years later. He is the patron of astronomers, scientists and people falsely accused.