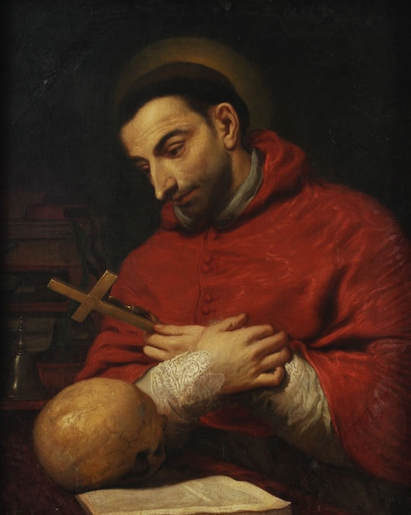 November 4th, the Church celebrates the memorial of Saint Charles Borromeo, (1538-1584) the 16th century, Cardinal, Bishop, and Counter Reformation reformer, who was instrumental in both the formulation and implementation of the Council of Trent’s doctrine. He was a born into a wealthy and influential Italian noble family that wielded power in the political and ecclesiastical domains; and was a nephew of Pope Pius IV. At 23, he assisted Pius IV in conducting the business of the Holy See, including the Council of Trent, (1545-1564) and was appointed a Cardinal. Shortly after, Borromeo was named administrator of Milan. His promulgation of the Council’s teachings was fruitful and immensely beneficial.

Borromeo’s intellectual gifts and deep piety foreshadowed his religious vocation. Defying the wishes of his family that he marry and continue in business pursuits, Borromeo renounced worldly riches to answer the Lord’s call. In the wake of the Protestant Reformation, he advocated reconvening the Council of Trent at a time when the Church was in desperate need of reform and renewal. His words to his fellow bishops during the convocation of the Council bespeaks the solemn nature and supreme importance of continuing their deliberations:
​
Let us fear lest the angered judge say to us: If you were the enlighteners of My Church, why have you closed your eyes? If you pretended to be shepherds of the flock, why have you suffered it to stray? Salt of the earth, you have lost your savor. Light of the world, they that sat in darkness and the shadow of death have never seen you shine. You were apostles; who, then, put your apostolic firmness to the test, since you have done nothing but seek to please men? You were the mouth of the Lord, and you have made that mouth dumb. If you allege in excuse that the burden was beyond your strength, why did you make it the object of your ambitious intrigues?

With the Council’s dissolution, Borromeo, now the Archbishop of Milan, sought to rebuild a diocese and a Church in complete disarray.  Through persistence, prayer and devotion to God, he created specific regulations for the clergy regarding their comportment, piety and formation. Likewise, he urged the lay faithful to observe Church teachings and aspire to holiness. Ever mindful of his Apostolic duties, Borromeo strived to model, in word and deed, discipleship in imitation of Christ.

He refused all luxuries, imposing harsh sacrifices upon himself, and donated generously to the poor. When a severe plague savaged Italy in 1576, causing scores to flee in fear, Borromeo remained to minister to the sick and the dying.

The heavy burdens of his office damaged his health. Charles Borromeo died in 1584, at the age of 46, holding a picture of Christ Crucified, dressed in sackcloth and ashes. His remains rest in a white marble crypt in the Cathedral of Milan. He was beatified by Pope Paul V in 1602, and canonized by the same on November 1, 1610.

St. Charles Borromeo is the Patron of Bishops, catechists, catechumens, seminarians, and spiritual directors, among others. ​
© 2020 St. Mark the Evangelist. All rights reserved.