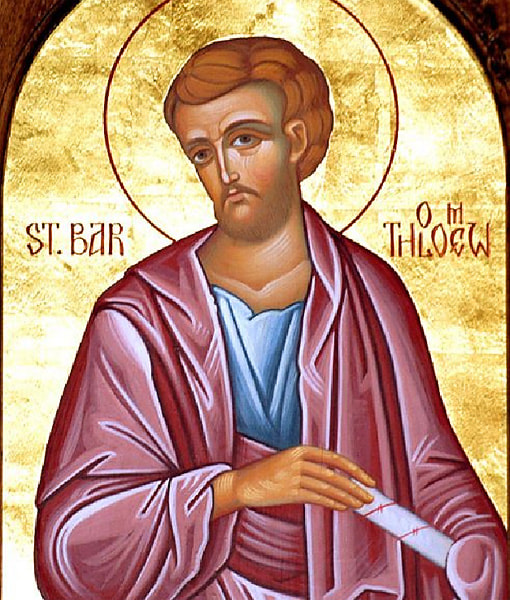 August 24th, is the feast of Saint Bartholomew, one of the twelve Apostles. He is mentioned in all four Gospel accounts. While little is known about his early life, Bartholomew was most certainly a devout Jew. His name means "son of Tolomai". Most scholars believe that he, and the Nathanael referred to in John, are the same person. An authority in the law of Moses, Bartholomew was a close friend of the Apostle Philip. Having received the gifts of the Holy Spirit on the first Pentecost, Bartholomew evangelized Asia Minor, northwestern India and Greater Armenia. While preaching in Armenia, he was arrested and sentenced to death.

Following Pentecost, Bartholomew embarked on a missionary trip to India. Popular piety records him as serving in Ethiopia, Mesopotamia, Persia and Egypt. Bartholomew and Saint Jude are credited with bringing Christianity to Armenia. Both are the patrons of the Armenian Apostolic Church. Fr. Pius Parsch in The Church's Year of Grace writes: "The Church of Armenia has a national tradition that St. Jude Thaddeus and St. Bartholomew visited the Armenians early in the first century and introduced Christianity among the worshipers of the god Ahura Mazda. The new faith spread throughout the land, and in 302 A.D., St. Gregory the Illuminator baptized the king of Armenia, Dertad the Great, along with many of his followers. Since Dertad was probably the first ruler to embrace Christianity for his nation, the Armenians proudly claim they were the first Christian State."

A non-Biblical source called the Martyrdom of Bartholomew, contends that the Apostle Bartholomew was martyred by King Astyages in Armenia as follows: "And when he had thus spoken, the king was informed that this god Baldad and all the other idols had fallen down, and were broken in pieces. Then the king rent the purple in which he was clothed, and ordered the holy apostle Bartholomew to be beaten with rods; and after having been thus scourged, to be beheaded."

Other accounts of his martyrdom, however, assert that Bartholomew was flayed or skinned before being beheaded. Michelangelo’s painting, The Last Judgment shows Bartholomew holding the knife of his martyrdom and his flayed skin. The altar of San Bartolomeo Basilica in Benevento, Italy, contains his relics. Because St. Bartholomew was without guile, he immediately recognized Christ as the Messiah sent by God.