Queenship of the
​blessed virgin mary 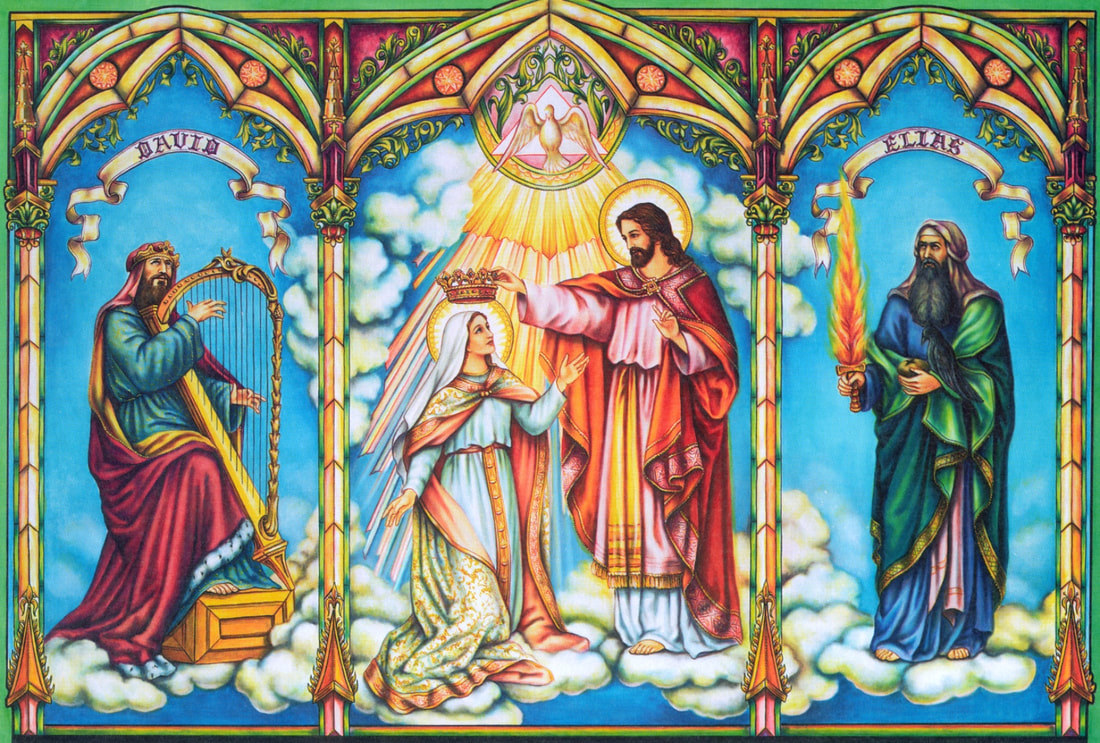 With the certainty of faith we know that Jesus Christ is King in the full, literal, and absolute sense of the word; for He is true God and Man. This does not, however, prevent Mary from sharing His Royal Prerogatives, though in a limited and analogous manner; for she was the Mother of Christ, and Christ is God; and she shared in the work of the Divine Redeemer, in His struggles against enemies and in the triumph He won over them all. From this union with Christ the King she assuredly obtains so eminent a status that she stands high above all created things; and upon this same union with Christ is based that royal privilege enabling her to distribute the treasures of the Kingdom of the Divine Redeemer. And lastly, this same union with Christ is the fountain of the inexhaustible efficacy of her motherly intercession in the presence of the Son and of the Father.

Without doubt, then, does our Holy Virgin possess a dignity that far transcends all other creatures. In the eyes of her Son she takes precedence over everyone else. In order to help us understand the preeminence that the Mother of God enjoys over all creation, it would help to remember that from the first moment of her Conception the Holy Virgin was filled with such a plenitude of grace as to surpass the graces enhancing all the saints. Recall what Our Predecessor Pius IX, of blessed memory, wrote in his Bull Ineflabilis Deus: "More than all the angels and all the saints has God ineffable freely endowed Mary with the fullness of the heavenly gifts that abound in the divine treasury; and she, preserving herself ever immaculately clean from the slightest taint of sin, attained a fullness of innocence and holiness so great as to be unthinkable apart from God Himself, a fullness that no one other than God will ever possess."

Spurred on by piety and faith, may we glory in being subject to the rule of the Virgin Mother of God; she bears the royal sceptre in her hand, while her heart is ever aflame with motherlove.

The Queenship of the Worshipful Virgin is celebrated in the Extraordinary Form on the 31st May to end the Marian Month, but it was moved to the 22nd August after the liturgical reforms succeeding Vatican II. The 22nd August is the octave day of the Assumption, and so is a natural conclusion to the Solemnity of the Assumption, just as in the Glorious Mysteries of the Holy Rosary we honour the Assumption in the fourth decade, and then honour the Coronation of the Virgin in the fifth decade.

This great Feast is important to the Church, for it reminds us of the excellence of the Virgin Mother, who the Church has always proclaimed as the Cause of our Joy. It is fitting that She, who was born of royal stock, should not only bring forth the King of Kings, the Prince of Peace, the "Celestial Emperor" (as the Council of Trent called Our Lord), but should also be elevated to the most supreme dignity fitting Her royal stock - that of Queen, nay, Empress, of Heaven and Earth. She receives this because the Divine Providence ordained that She should be the Woman to bring forth the Son of David, Whose Kingdom is from everlasting unto everlasting.

In ancient Hebraic culture, the Kings of Israel often married many wives, thus making it difficult to chose one wife to be Queen due to jealousy amongst the harem. So, the Kings got around this by declaring their mothers to be Queens of Israel. In a typical fashion, the Old Testament mentions an interesting scene, here produced in full from the Douay-Rheims version:

And Adonias the son of Haggith came to Bethsabee [Bathsheba] the mother of Solomon. And she said to him: Is thy coming peaceable? he answered: Peaceable. And he added: I have a word to speak with thee. She said to him: Speak. And he said: Thou knowest that the kingdom was mine, and all Israel had preferred me to be their king: but the kingdom is transferred, and is become my brother's: for it was appointed him by the Lord. Now therefore I ask one petition of thee: turn not away my face. And she said to him: Say on. And he said: I pray thee speak to king Solomon (for he cannot deny thee any thing) to give me Abisag the Sunamitess to wife. And Bethsabee said: Well, I will speak for thee to the king.

Then Bethsabee came to king Solomon, to speak to him for Adonias: and the king arose to meet her, and bowed to her, and sat down upon his throne: and a throne was set for the king's mother, and she sat on his right hand. And she said to him: I desire one small petition of thee, do not put me to confusion. And the king said to her: My mother, ask: for I must not turn away thy face.
[2 Kings (1 Kings) 2:13-20; emphasis mine]

What we have just read here is what happens between Mary and Jesus. When we ask the Virgin to pray for us, She in turn goes to Jesus, and intercedes for us. If we were to read the story of the wedding feast in Cana whence Our Lord turned water into wine, He works the miracle at the request of His Mother, even though it is not His time to work such miracles. Notice in the above text, that Solomon states that he MUST hear his mother; thus through his words the Holy Spirit teaches us that Christ refuses not the requests of His Mother. Since He is the Most Perfect, it stands therefore to reason that He keeps the Commandments in His Humanity perfectly, especially that holy rule in honouring one's father and mother.

Those who blaspheme against the Holy Virgin, such as the Protestants, do so because they know not the King of kings. They do so in their ignorance of history and Scripture. However, we Catholics have the full truth, for it was given to the Catholic Church. We understand the reality of the Virgin's role in Salvation History, from Genesis to the present day! It is not a most awful thing that we share one common Mother who is Queen, and most powerful before God?