our lady of mount carmel 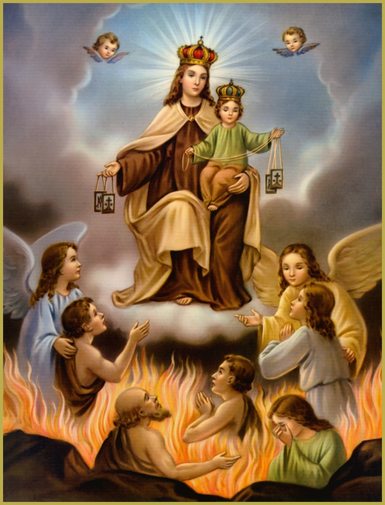 The Story of Our Lady of Mount Carmel

Today is the principal feast day of the Carmelite Order. Through the efforts of the crusader Berthold, a group of hermits living on Mount Carmel were organized into an Order after the traditional Western type about the year 1150. Oppressed by the Saracens, the monks slowly emigrated to Europe. During the night preceding the sixteenth of July, 1225, the Blessed Virgin is said to have commanded Pope Honorius III to approve the foundation. Since the Carmelites were still under constant harassment, the sixth General of the Order, St. Simon Stock, pleaded with the Blessed Virgin for some special sign of her protection. On July 16, 1251, she designated the scapular as the special mark of her maternal love.

That is why the present feast is also known as the feast of the Scapular. The scapular, as part of the habit, is common to many religious Orders, but it is a special feature of the Carmelites. A smaller form of the scapular is given to lay persons in order that they may share in the great graces associated with it. Such a grace is the "Sabbatine privilege." Pope John XXII's Bulla Sabbatina  affirmed that wearers of the scapular are soon freed from the flames of purgatory, at least by the Saturday after death. The confirmation of the Bulla Sabbatina was promulgated by the Sacred Congregation of Indulgences, July 4, 1908.

Adapted excerpt from The Church's Year of Grace, Pius Parsch
Taken from BigCCatholics
© 2020 St. Mark the Evangelist. All rights reserved.