the dedication of
​the lateran basilica 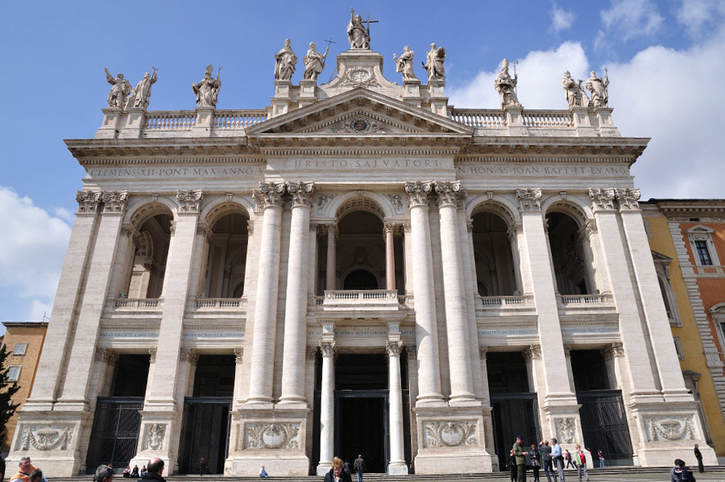 ​November 9th, the Church celebrates the feast of the Dedication of the Lateran Basilica in Rome, the oldest and highest ranking of the Eternal City's four major basilicas. The Basilica of Saint John Lateran is the ecclesiastical seat of the Holy Father, the Bishop of Rome (not Saint Peter's Basilica as popularly believed).

It is named in Latin as: Archibasilica Sanctissimi Salvatoris ac Sancti Ioannis Baptistae et Ioannis Evangelistae ad Lateranum [Archbasilica of the Most Holy Saviour and Saints John the Baptist and John the Evangelist at the Lateran]. It is also called The Mother and Head of All Churches in Rome and in the World because it is the Mother Church of all Catholics due to its position as the Cathedral Church of Rome, and seat of the Bishop of Rome.

The Lateran Palace, originally the residence of the Roman Empress Fausta (Constantine the Great's second wife), was donated by Constantine to Pope St. Miltiades. Later in AD 313, St. Miltiades convened a synod of bishops at the Lateran Palace that condemned Donatism, an ancient heresy. Later, in the pontificate of Pope St. Sylvester I, the Palace's basilica was converted and extended, eventually becoming the Cathedral of Rome. It was dedicated in AD 324 by Sylvester I to Christ the Saviour.

Its feast is a reminder of our fidelity to the Bishop of Rome, and our communion with the Vicar of Jesus Christ. We profess in the Creed that we are the One, Holy, Catholic and Apostolic Church. Since we are One, that is, united to the Chair of Peter in one faith, one worship and one authority, the Church reminds us of this important fact.